Sometimes you look at a color photo and instinctively think, “This would look much better in black and white”. So how to do you go about achieving the monochromatic look, when you didn’t shoot in black and white or design the image to be grayscale? Luckily, Photoshop has some fairly easy ways of doing this…

The Channel Mixer is your first option to switch from Color to Black & White. The Channel Mixer is a tool that enables you to adjust the individual color channels (like the Red, the Green, and the Blue) that make up the color values of any image. It allows you to make color adjustments at the additive level, in terms how you’re blending the raw color to make the colors you see. 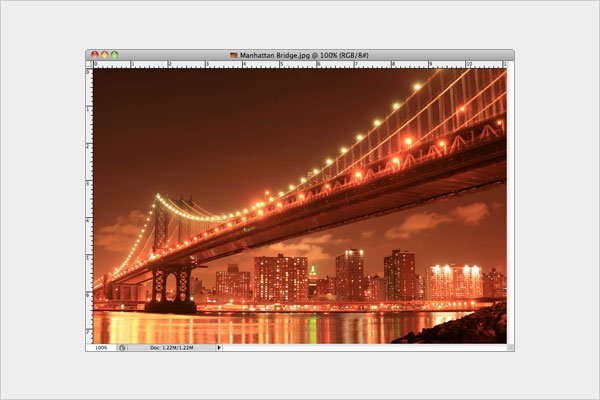 Open up the image you want to work the magic on, press Command-1 (PC: Control-1) or double-click the Zoom Tool to bring the image up to 100% of its actual size. You then want to add an Adjustment Layer, otherwise you’ll throw away all the color information and you might not want to do that just yet. 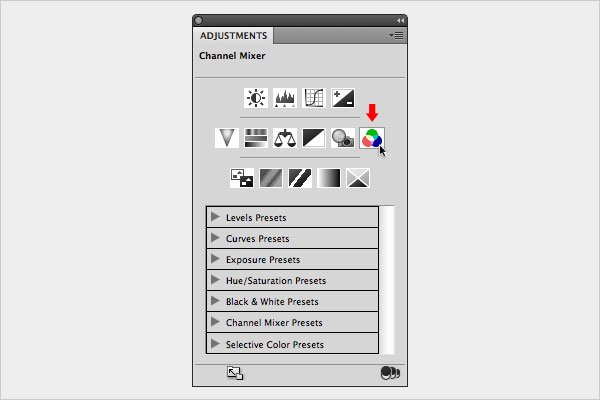 In the Adjustments Panel, select Channel Mixer; this is where you can become a mad scientist in the lab! Channel Mixer is also found under the Image Menu, nimbly navigate IMAGE > ADJUSTMENTS > CHANNEL MIXER. You’ll need to choose the color mode that you want to work in (RGB, CMYK). You’ll now have access to the all the different color channels, plus you have a Target Adjustment Tool (that Pointing Finger), in which you can click-n-drag directly on the photo to raise or lower a specific color/value. This is helpful if you’re not versed in color theory (do you remember the Color Wheel from art class? If not, then you’re not versed in color theory). 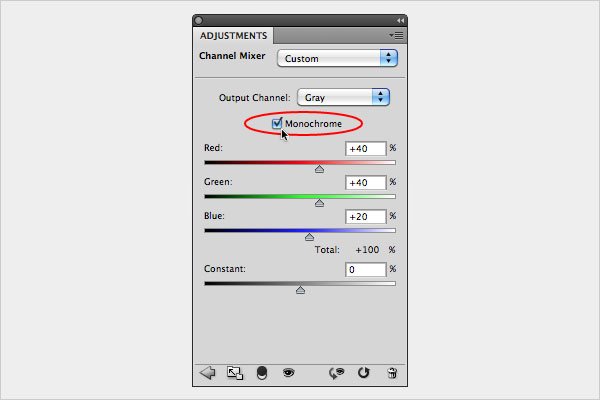 Check the MONOCHROME box. This creates a color image that only contains grayscale values, so that you can adjust the value of color channels (the separate RGB or CMYK sources). Now you can make adjustments to the level of details and contrast in your image, before the final conversion. Start tweaking the Source Channel sliders to enhance and reduce the various values. For the best results, don’t exceed 100% on the source channel composite (Photoshop will warn you if you go over), because you really won’t be able to reproduce that composite element in a distributable format. The last slider is CONSTANT, which adjusts the grayscale value of the output; a negative number adds Black to your image, a positive number injects white…

You can always go into the Presets Menu, which gives you a series of settings of channel mixes that approximate the “look” of a Black & White photo in which a B&W filter has been attached to the lens; i.e. the Black & White with Red Filter, blocks the Red Channel completely, thus boosting the other two colors in the channel, such that blue skies pop and green foliage looks extra lush. You can save Custom settings, too. Once you have a Channel setting that you find pleasing, you can save those settings as a Preset; this way if you have a series of photographs that you know will all require the same base-level of adjustment, you can apply you Preset and then make the additional fine-tuning tweaks.

Now that you have the sweet spot, lower the Amount by around 20 to 30 percentage points. For the final tweak, use the Threshold slider. Threshold sets a frontier in which the sharpening takes hold or doesn’t, and that’s based on the tonal value of the pixels that you’re looking to affect. The value establishes how different the sharpened pixels will be from the surrounding area before those pixels are affected by the filter. This is one of those “seeing is believing” options, so try between 2 and 20 for starters and then raise the Threshold to soften the sharpening until the image looks fabulous. Next, click on the Preview to see the before and after images. Since sharpening brings out some noise in the photo, you’ll want to change the blend mode to counteract this side effect; so change the Blend Mode on the layer you’re sharpening to Luminosity. This projects the image’s value, which is all important when looking to get rid of noise.

Before & After B&W Conversion 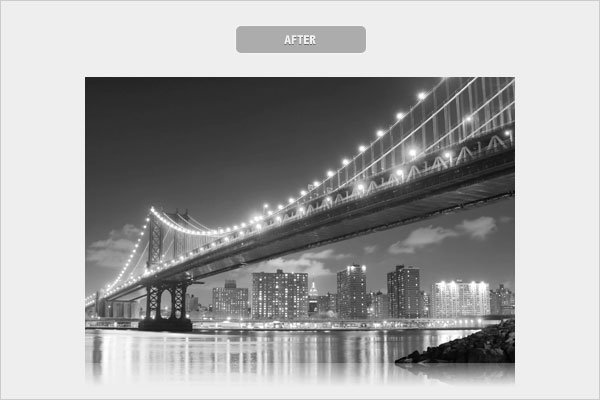 You can also go back to the Adjustment Panel and select Black & White Adjustment Layer. This gives you access to all the different color channels (Red, Yellow, Green, Cyan, Blue and Magenta) plus you have a Target Adjustment Tool, where you can use the Tool to click-n-drag directly on the photo, and raise or lower a specific color/value. This is helpful if you’re not versed in color theory.

Open up the image you want to work on, press Command-1 (PC: Control-1) or double-click the Zoom Tool to bring the image to 100% on the screen. It’s always important to work at 100%, because you can see the details in your photo and understand how your editing is working in relation to how it’s going to look printed out.

In the Adjustment Panel, select Black & White – the half-black/half-white rectangle – to create the Black & White Adjustment Layer (this precludes you from having to make the background layer editable). This adjustment layer gives your move flexibility than just desaturating your image. 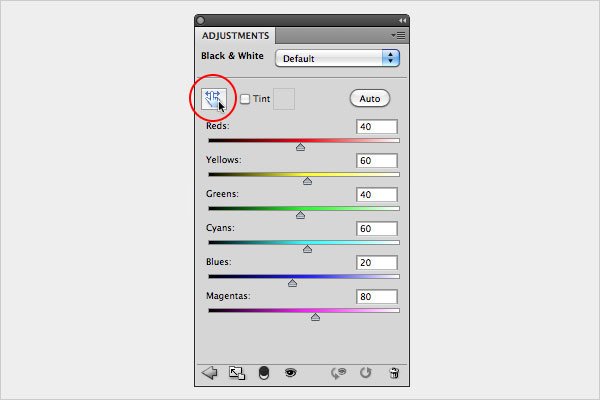 Once you do this, Photoshop CS5 switches the Adjustment panel to show all the potential colors (RGB & CMYK), a Tint control (for sepia-toned type images) and a Target Adjustment Tool; that Pointing Finger, which you’ll grow to love as it enables you to click-n-drag on an image. By moving the color channel sliders you adjust the values & contrast in your image and can better fine-tune your conversion. 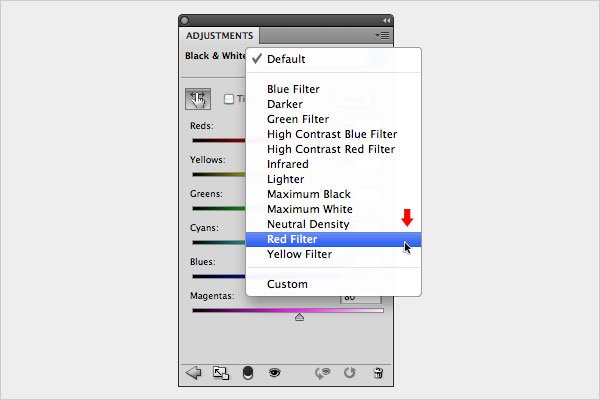 Now that your image is Black & White, you need to tweak it to make it pop. There are several presets that you can select as well. The presets approximate the shift in tonal value that you’d get by slapping a Black & White filter on your lens or printing on different quality photo paper. By playing around with these presets, you might find a setting that really says, “Wow.” Black & White images usually fare better with higher contrast, so try that or the “Red Filter”. You might want to brush up on the “Zone System” to really get the best out of your Black & White conversions. But if you don’t have time for that (and who does these days?), then playing around with the presets will give you a good sense of how the grayscale values react.

Before & After B&W Conversion 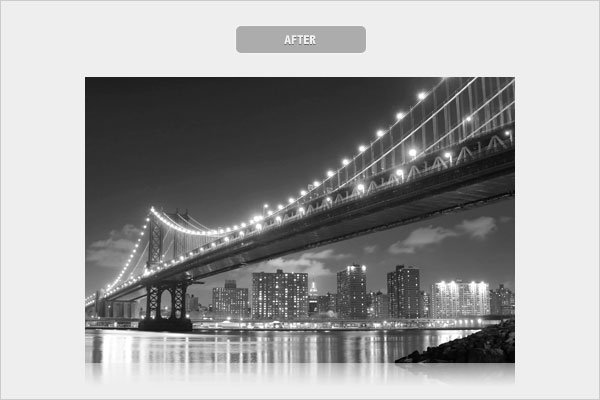 You can also make further tweaks by applying a Curves Adjustment Layer, and making changes to the output color curve. The curve determines what intensity of an input value results in a certain intensity of an output value, such that you can make your Blacks blacker by flattening the lower part of the curve or increasing the highlights by flattening the upper portion of the curve. You do this by inserting at least two manipulation points on the baseline curve (one at lower left, one at the upper right), and then dragging the point(s) and changing the angle of slope of the curve (hence “curving” the line) to affect various output values. For example, you would click the mouse on the lower left-hand corner vertex and the upper right-hand corner vertex, and then drag the right-hand corner point up (which brightens the whites), and the left-hand corner point down (which darkens the blacks).

There are many methods for converting your color images to Black & White – using the Channel Mixer and selecting monochrome or using the Black & White Adjustment Layer and then using the Curves Adjustment Layer to tweak the monochromatic image to your liking. Once you’ve converted your color image to Black & White, you’ll get an understanding of how to make adjustments when in shooting in color to get the most out of the image as a Black & White image. Black & White images require a different mindset, because you’re not looking to accurately reproduce the world that we see, but to create an abstract version of our world… that is a world that primarily consists of texture, contrast, value and pattern. Once you become proficient in seeing the world this way, and you’ll create most startling images. You’ll start to pre-imagine shots through a different lens and you’ll approach the additional methods of image manipulation differently (increased contrast and less brightness, for example).