ISO or light sensitivity rating is an algorithmic value that indicates the film’s or the image sensor’s specific sensitivity to light. The ISO values on a roll of film or ISO setting on a digital camera are these indicators.

ISO is actually an acronym, which stands for International Standards Organization. The ISO rating and the shutter speed and aperture setting are the three elements that determine the final exposure of the photographic image.

The ISO rating, which ranges in value from 25 to 6400 (or beyond), indicates the specific light sensitivity. The lower the number, the less sensitive to light the film stock or image sensor is. Conversely, a higher number indicates a higher sensitivity to light, thereby allowing that film or image sensor to work better in low light conditions. 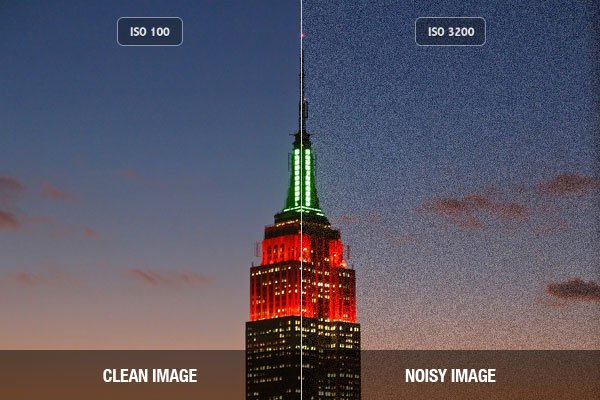 In digital photography, the same logic applies… the lower the ISO rating, the less sensitive the image sensor is and therefore the smoother the image because there is less digital noise in the image.

The higher the ISO rating (more sensitive), the stronger the image sensor must work to establish an effective image, which produces more digital noise (those multi-colored speckles in the shadows and in the midtones).

So what is digital noise? Any light signal that does not originate from the subject and therefore creates random color in an image. The digital camera engineers have designed the image sensor to perform best at the lowest ISO (just like with film). On most digital cameras, this is ISO 100, although some high-end DSLRs have a mode that brings the ISO down to 50 or even 25.

One more thing about the “grain”; in the old-fashioned non-digital image, many film photographers found ways to creatively and artistically utilize the grain to affect the final mood and tone of an image. Unfortunately, due to the nature of digital noise (as it manifests as random clumps of colored speckles), it is highly undesirable. However, some photographers have found limited creative ways to use digital noise. Maybe you can join that rare club. 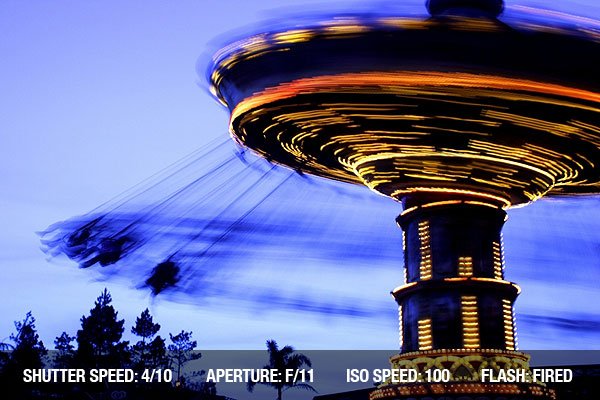 Lower ISO ratings produce color-accurate, smooth, and aesthetically appealing images… and this requires ideal lighting conditions. However, there are some subjects that you want to photograph in low light conditions. Or, you may want to stop fast-moving objects (a hummingbird, a racehorse, or a carousel). In both situations, you need higher ISOs to capture those images with an acceptable exposure.

Unlike film, with a digital camera, you can increase the ISO with the touch of a button, and this flexibility makes it much easier to get the image you want. So with the higher ISOs, you can use faster shutter speeds to eliminate motion blur and/or camera shake. If you want to use motion blur creatively, then decreasing the ISO is simple, and you can then decrease the shutter speed (less than 1/30s) to achieve the desired motion blur and still have smooth, noise-less images.

The size of the digital camera’s image sensor dictates what ISO setting provides the least amount of digital noise. One must understand that image sensor size is not the same thing as pixel count.

Image sensor size is the actual physical dimensions of the sensor. For most of the history of digital photography, the image sensor has been smaller than a 35mm film frame. On point and shoot cameras, the sensor was quite small, and on most DSLR cameras, the image sensor has been the size of APC film (23x15mm). Smaller image sensors produce much more digital noise at higher ISOs (like 800) mainly because the high pixel count means that more pixels are being packed into a smaller area, thus producing more grain at all but the lowest ISO.

Currently, many DSLR manufacturers produce image sensors the same size as a 35mm film frame (called Full Frame). The larger Full Frame sensor allows for more and larger pixels to be packed onto the image sensor, thus allowing for smoother, grain-free images at an ISO setting of even 1600 (in some cases). On Full Frame sensors, the larger pixels are individually more sensitive to light, so the electronic energy required to mimic ISO 800 doesn’t create the same amount of digital noise as with a smaller image sensor. The Full Frame cameras enable you to capture dynamic and effective images in various challenging or low light conditions without extraneous digital noise. 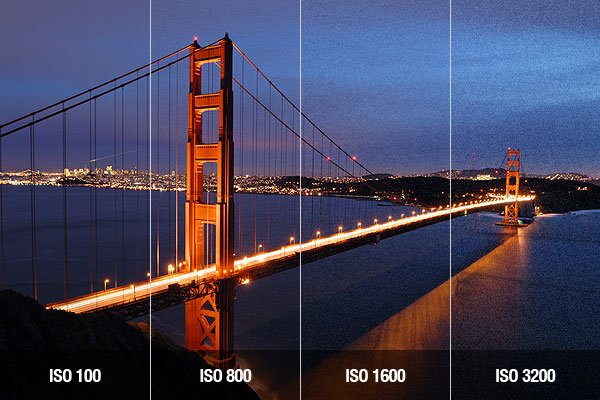 It is important to remember that the lower the ISO rating, the better the image quality will be.

While most digital cameras have a default “Auto ISO” setting, this reduces your control because it can automatically set a higher ISO, which will result in a grainier (noisier) image when other settings could have created an acceptable exposure with less noise.

Increasing ISO affects image quality in two major ways: 1) The distinction between fine details is reduced. 2) When you enlarge the image and make digital prints, or when you save the image as a jpeg (which has a high level of compression), the inherent high level of digital noise will result in a “muddier” image after conversion.

As we’ve stated, the lower the ISO, the smoother, cleaner, and “better” images you will have. Lower ISO images will be more color-accurate and more aesthetically captivating. ISO between 100 and 200 will give you the best results. Depending on the image sensor and the camera’s engineering, you can get away with ISO 400 and still have clear, clean, and sharp images for the vast majority of enlargements (up to 20×24).

For example, you might need to bring in additional light sources to keep the ISO as low as possible for smoother photos. So when you’re faced with adverse lighting conditions (i.e., low light or high contrast lighting) or require higher shutter speed, you must sacrifice the smoothness available with a low ISO to get the shot with a higher ISO.

In other words, increase the ISO and deal with the consequences later because if the alternative (a lower ISO setting) means that you miss the shot, then it is better to make the trade-off.