If you are celebrating New Year’s Eve, Memorial Day or July Fourth with a bang, it's time to catch some fireworks displays on your camera. Here are some simple techniques for taking great shots of fireworks. 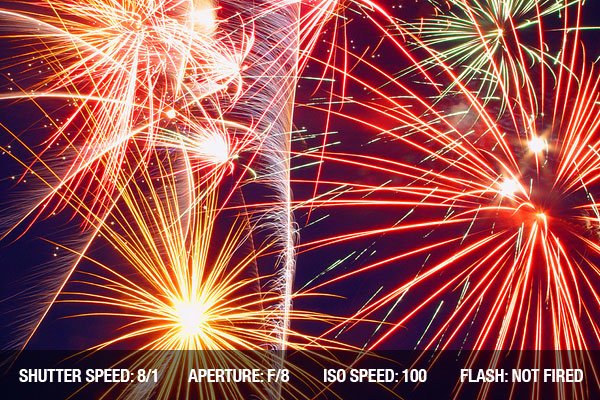 When you are going to photograph fireworks, be prepared. Make sure you have enough memory cards and extra batteries. You will need to take a tripod, a wide-angle or a telephoto zoom lens, and remember to arrive early. Place the camera on a tripod, and turn the mode dial to M (manual) mode; we want f/8 – f/16 for a greater DOF (depth of field) and a long exposure anywhere between 1-10 seconds. Use your camera’s self-timer or a cable release to take the photo with absolutely no blurring. For dramatic effect, try to capture multiple fireworks trails across the sky. 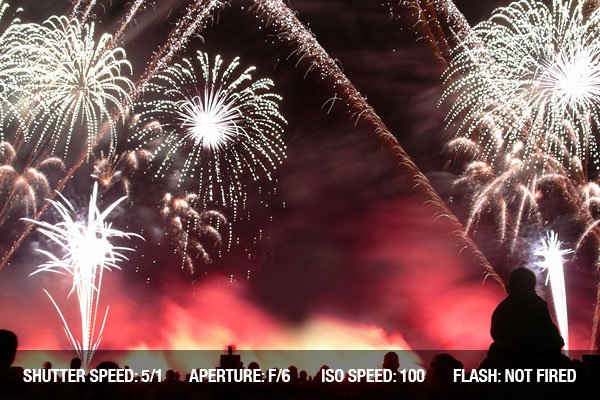 Position yourself in a good spot at the center of the action. It’s a great idea to include the heads of other visitors, as it gives a sense of perspective and dimension. Place you camera on a tripod and choose a large aperture to keep things fairly sharp. Set your ISO at 100 to keep the digital noise at a minimum. Wait for multiple fireworks to go off, and use a cable release to take the photo. Don’t use flash because it could ruin the effect in the image, and take a longer exposure to catch various stages of breathtaking fireworks.

Use a Slow Shutter Speed 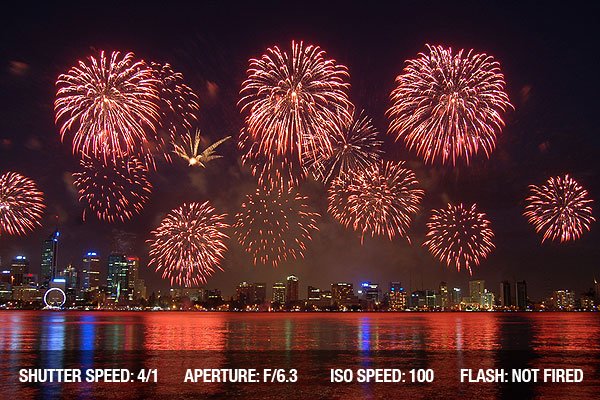 When it comes to shutter speed, you should pick a slow exposure, anywhere between 1 – 15 seconds in order to capture the light trails. The longer the exposure, the more lines will appear and the longer they will look. Any faster would not catch the extended moment of the fireworks exploding. You should take the image using the camera’s self timer or a cable release so that you avoid touching and jiggling the camera. If you don’t have anything to hold your camera steady, increase your camera’s sensitivity to light by increasing the ISO. This will give you shorter exposures without blurs, but be prepared for more grain or ‘noise’ in your fireworks pictures. 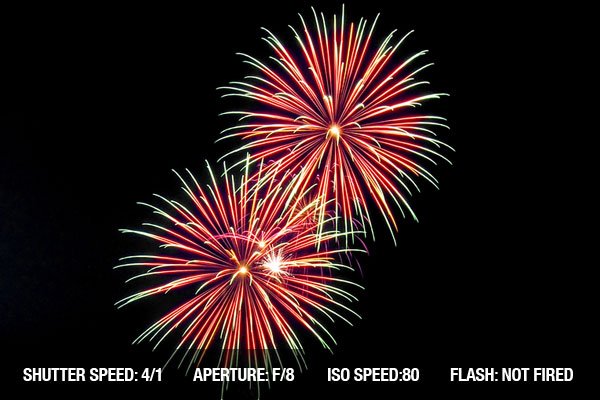 Snap up the action, but avoid shutter lag (the time it takes between pressing the trigger and the camera taking the picture) by keeping the shutter button pressed halfway. When the right moment comes, press all the way down to instantly capture the desired image. Let the smoke clear away before taking your next shot, so as to reduce the need to edit the fireworks photos with software later.

Shoot from a Distance 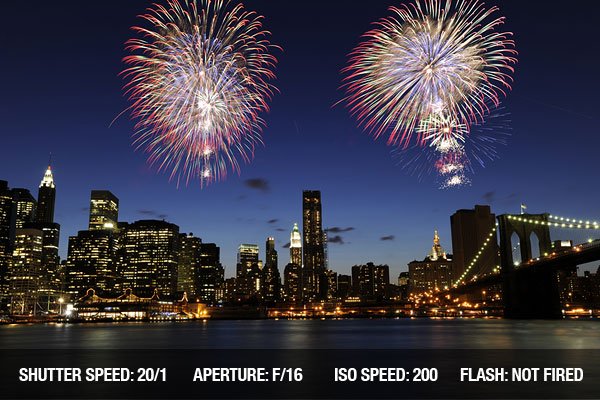 Mount the camera on a sturdy tripod and position it so that the bridge, the water and buildings can be seen; we want interest in the foreground and background. Set the mode dial to AV (Aperture Priority) mode, set the ISO at the range of 100 to 400 and choose an aperture of f/16 or more. Ideally we want a long exposure anywhere between 1-30 seconds for a silky water effect. Use a wide-angle lens (10mm – 42mm) for a broad perspective. You’ll want to disengage the autofocus on your lens, and set it to Infinity (the sideways 8 on the lens barrel); this isn’t always apparent on some digital lens, so you have to figure this out for your given lens. Use your camera’s self-timer or a cable release to take the photo with absolutely no blurring.

Use the lowest ISO possible to keep the image high quality, and a slow shutter speed to capture the light trails. You don’t want to be any faster than 1/15s, though some shots may require even longer shutter speeds if you use a small aperture. If you are finding that the camera is not recording enough light for the fireworks, reduce the ISO down to 50 and choose the smallest aperture, at around f/32. This will force the camera to give you a slower shutter speed, while giving you a very high quality image.

Always take a tripod – there’s no other way to use a long shutter speed without getting camera shake. Use a telephoto zoom lens if the fireworks display is far away from you or a wide-angle lens if you want to capture the surroundings or the people at the event too. Remember to use a low ISO for a high quality image and you can also choose a small aperture for a sharp picture, although your camera must be on a tripod for this. Use a shutter release cable or a remote to take the picture – you can’t use self timer as you can’t predict exactly when the firework will go off.

One of the most important things when it comes to shooting fireworks is timing. Always keep an eye out and get used to predicting when a firework will burst – you don’t want to capture it taking off or when it has finished. You want to photograph a firework as it makes its colorful burst. With some practice you will be able to record some stunning and attractive images worthy of your portfolio.