You’ve taken your pictures, now where do they actually go? The images reside on the memory card in you camera, but the more important question is “How many photos can I store on the card or on my computer’s hard drive?” The answer to that comes down to one basic thing – image quality. Essentially the various image file formats that are available to you differ in how much actual photographic information (this includes metadata) you wish to “store” within in each image file, and how much is thrown away. That’s the basic nature of compression – the elimination of potentially extraneous information, and the three main image file formats are JPEG, TIFF, and RAW. 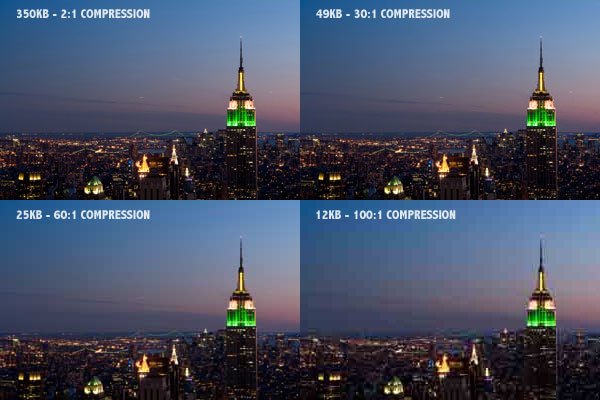 JPEG (which stands for Joint Photographic Expert Group) is the most popular form of storing digital images. When you shoot using JPEG you get more photos on your memory card, and it’s faster (in terms of saving the image to the camera and in photo manipulation later). However, JPEG is perhaps the worst of the three, because the compression algorithm used to save the image disregards far too much image information that cannot be reconstructed during decompression. JPEG usually achieves a 10:1 to 20:1 compression with little perceptible loss of image quality. You can adjust the amount of compression, so you can control the image quality and the file size. JPEG compression discards so much information that it is much more difficult to effectively post process your image (i.e. correcting color, sharpness and increasing the size of the image).

In addition, the re-edited and saved image loses still more quality (think of it as Xeroxing a photocopy). Each subsequent re-edit and save of a JPEG further reduces the quality. JPEGs are perfectly fine for most uses of digital photography (hence their overwhelming popularity), as they are smaller files and make distributing the snapshots of your trip to Hawaii or a wild night at the club that much easier.

TIFF (which stands for Tagged Image File Format) is considered the standard photographic file format, because it is a highly flexible format that uses a lossless compression algorithm, so there’s no image degradation during compression. This ability to store image information in a lossless format makes a TIFF file very useful for archiving images. Unlike a JPEG, a TIFF file may be edited and re-saved without losing any image quality. In addition, when using a third party image processor like Adobe’s Photoshop, you retain access to the individual layers of an edited and saved image, so you can revisit them in the future. There are two types of TIFF configurations – 16-bit and 8-bit; 16-bit provides you with more information to manipulate the final image in the digital darkroom (i.e. color saturation changes, color balance changes, brightness & contrast changes, etc.), and 8-bit (best for archiving and printing), which retains all the “work” you’ve done on the photo (the layers), but saves to a relatively smaller size. In general, TIFF files can be quite large… easily ranging up to 48MB per image. But this added file size allows for very large blow-ups with no digital artifacts in the print. The one downside of TIFF is that the majority of cameras do not shoot in a dedicated TIFF file format.

RAW is basically just that – the raw, unprocessed, naked image. Think of it as the digital negative, because it performs the same function as negatives do in film photography. Just like with film negatives, RAW files need to be “processed” into a viewable format (usually TIFF or JPEG). Also, RAW files – like film negatives – have a wide dynamic range. So what’s the point of shooting RAW? You shoot RAW if you expect to do a good amount post processing work in your digital darkroom. Let’s say you shot indoors under tungsten lights, but you forgot to change the camera’s white balance from daylight. If you save the image as a JPEG, you’ll be junking most of the color information and you’ll end up with that red/yellow image (that we’ve all cringed at). With a JPEG you can’t get that lost information back, manipulating the image would be difficult, and you still might not get a pleasing image. However, as a RAW file, all the color data is still available, and you can recover the image; correct the white balance and… voila, a much more appealing photograph.

So you’re asking yourself: Which format? That’s a decision that you make based upon your photographic wants and needs. It’s more than just considering file size; it’s anticipating how much post processing work that you might have to do get the best image possible. One major drawback to RAW is that there’s no standardization, so each camera manufacturer has their “style” of RAW. Professionals mainly shoot in RAW because they need to be able to make as many unrestricted changes as the client wants for the final image, and you may want that too. You need to be computer savvy to get the most out of RAW. In addition, the unprocessed nature of RAW files allows you to keep options open for the future with your images as new photo imaging software comes out and your ability to edit images changes . While JPEG is one of the most widely used file formats allowing you to save an image as a small file and high quality, TIFF and RAW formats are larger in size but maintain exceptionally good picture quality, which is preferred by most of the professional photographers.