Soccer can be something you photograph on a local level, using a telephoto zoom lens (say 300mm). You may also cover a professional game in a big stadium with a powerful 800mm lens. With soccer, at times there can be a lot of action, while at other times there doesn’t seem to be much going on. Being able to sense when the action will happen is essential to taking exciting soccer photographs.

Focus on the Crowd 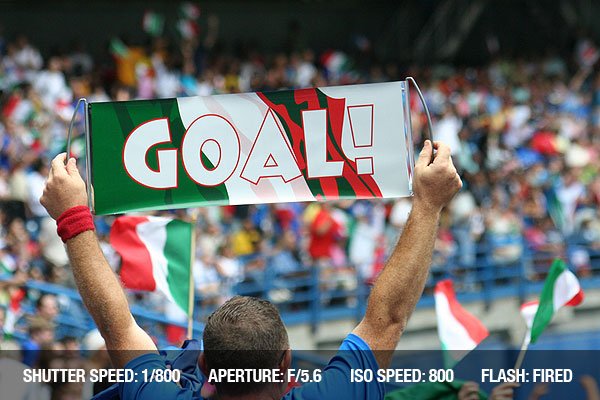 The Soccer crowd are usually a spirited bunch; so be prepared for colorful outfits and banners if you’re at a soccer match in Europe or South America. You can use a wide-angle lens of 17mm – 40mm to capture huge crowds, though it is wonderful to have a telephoto zoom lens to pick out the finer details. For example an image of a banner that reads “GOAL”, screams soccer. As a suggestion, wait for something to happen on the field but instead of the players, photograph the reactions of fans in the crowd. Capture those emotions when the action happens! 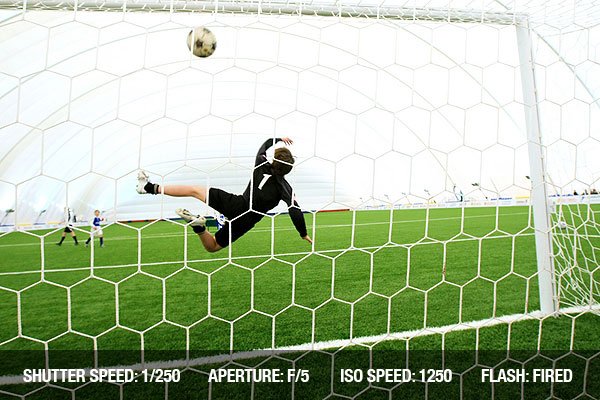 Ideally, try to sit near the field on a lower level so you can see more than only the players’ heads and backs. An interesting place to sit is behind the goalkeeper; although there might not be action all the time, you can zoom in and wait for the moments when a ball approaches. Set the lens focus mode to AF (Autofocus) and select continuous focusing mode to automatically re-focus the lens on the moving player.

A telephoto zoom lens is essential for shooting portraits of individual players – you want at least a 300mm lens. You might want to attend training practice for a local team, and focus on the players who are practicing ball tricks or special skills. Use the widest aperture possible (f/2.8-f/4) and a shutter speed of 1/1000th of a second to freeze the action especially when the ball is in the air. At a practice field you can use a tripod or a monopod for extra stability. 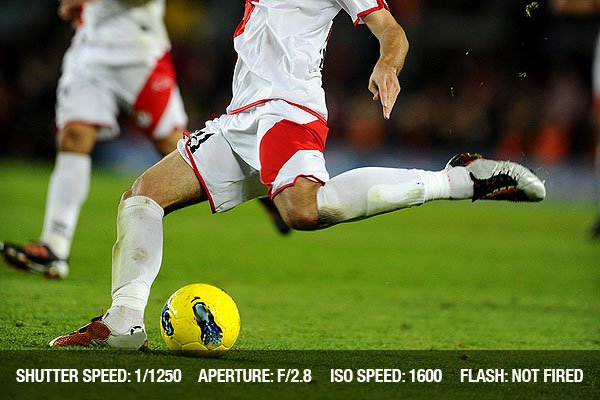 If you are in the middle of the field, then you can capture moments during game play. There is only one soccer ball in play, so zooming in on the ball and then following it with your camera is the best bet for an action image. Set the focus mode to continuous focusing (AI Servo AF Canon/AF-C Nikon) so that the lens can constantly maintain its focus on the moving soccer player. For multiple shots use continuous shooting mode and hold down the shutter button as long as you’d like. When employing continuous shooting for soccer photography, use as large an aperture as possible for a blurred background so you can isolate the specific soccer player that you want, and capture his or her efforts. 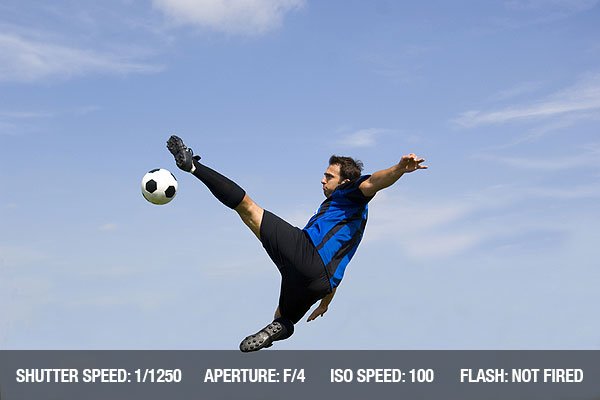 Occasionally soccer players will jump high to hit a ball with the head (known as a header) or excite the fans with a dramatic “bicycle kick” where the ball gets kicked backwards over the player’s own head. By keeping the shutter speed at 1/1000th of a second, you will avoid the risk of any blur. Zoom in as closely as you can and use continuous focusing; you will have to preset it by depressing the button halfway, then taking the shot at the best possible moment. If the widest aperture doesn’t give you the desired shutter speed, then don’t be afraid to increase the ISO. 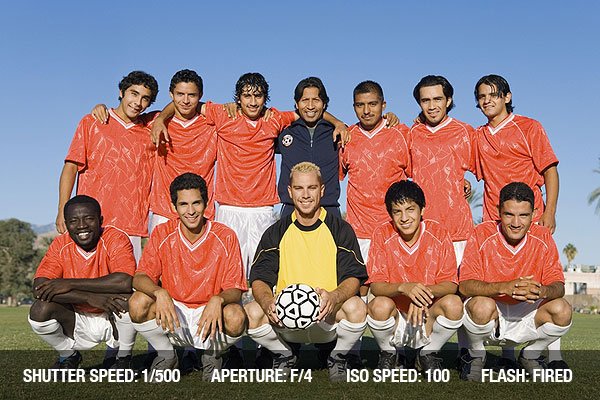 Before the soccer match (or practice), you’ll want to get a group shot of the players and the coach. One way to do this is to position them in two rows – one standing, one kneeling – in order to properly see everyone. Then for example, use a 35mm lens to make sure you’re close enough to see everyone’s face and have limited distortion. Set the shutter to anywhere between 1/250th to 1/500th of a second, and set the aperture to f/4 or f/5.6 for a sharp image with a shallow depth of field.

Soccer is a game of passion, and even in its slow moments, there is always something to photograph. Don’t forget the referee! In soccer, the referee is the one who will dish the punishment for any fouls, so expect players to direct some angry words his way! If the weather is wet and dark (soccer is often played under the gloomiest conditions), increase the ISO. Be cautious with ISO speed though, because a high setting of 1600 may cause noise or grain. Sometimes “mistakes” can bring pleasant surprises as a grainy photo can look dramatic when combined with droplets of rain.

If you want to freeze action make sure you are using a fast shutter speed to avoid any blur; nothing is worse than zooming in and seeing slight blurring around the edges of the main subject. Use ISO of 100 to 800 for best results, and you can set the ISO at 1600 or higher but you’ll have to consider the digital noise. If you want to capture motion or you are panning a player, then choose a shutter speed of 1/60th of a second to begin with, and increase or decrease the shutter speed depending on how the image looks on your playback screen. Keep the aperture between f/4 to f/5.6 for optimal results – relatively good depth of field as well as letting in enough light so you have the most flexibility with a range of shutter speeds.

A telephoto lens is highly recommended. Consider one of at least 300mm and consider getting a zoom, because the field is big. Soccer matches last 90+ minutes with only one break, so take enough batteries and memory cards. You might want to consider getting an extender, or teleconverter. This is a lens mounted device that increases (usually doubles) the focal length of the lens. A teleconverter allows you to get much closer to the action, at the expense of brightness – a 2X teleconverter magnifies the lens by two, but also cuts the brightness in half. A monopod is useful but not always allowed into stadiums. Monopod use shouldn’t be a problem if you have asked for permission to use one, ahead of time.

Photographing a soccer match can involve slow periods interspersed with quick, bursts of action and emotion. To ensure that you’re ready for the action, you’ll want to have your camera set with a higher shutter (say 1/800s or 1/1000s) to capture the action at the drop of a dime. To keep the depth of field shallow enough to focus on the action at hand, set your aperture at f/3.5 or f/4… this way you can effectively pan with the play, and capture the soccer players in action. You’ll be tempted to increase your ISO for faster shutter speeds, but you don’t need to go above 400 as too much digital noise will be apparent, and whatever image you’re after can be captured at 1/1000s. Bring additional batteries and memory cards, and a monopod if possible since you’ll be using at least a 300mm lens.