New Year’s Eve is by far the world’s biggest party - think about how the media strives to connect the dropping of the Ball in New York’s Times Square with the other parties going on all over the country -regardless of the time zone! Big parties come with a lot of expectations and a big desire by party guests to makethe most of the evening. It’s up to you to capture these highly celebratory moments and still partake in the fun. 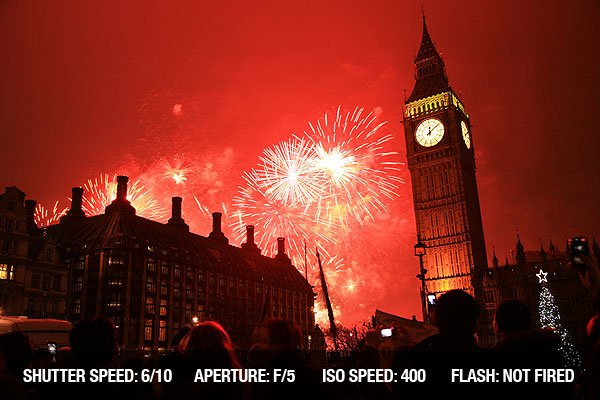 Depending on where you live, taking New Year’s Eve photos outside will give you an extra variable on what to shoot and when.

Many cities have major outside parties and celebrations (Las Vegas, Rio de Janeiro, Paris, New York, London, Sydney, etc.) and if you want to experience a different type of New Year’s Eve party, then make sure you are in one of these cities.

If you’re not, there can always be something interesting and unexpected. That’s what you’re looking for when you get down to it – something unexpected and memorable.

You’ll want a fast zoom lens and use a high ISO (like 400 or 800) for maximum flexibility and versatility; avoid using a flash, as people are having a good time and might not want to know they’re being photographed. They’ll thank you in the New Year, though. 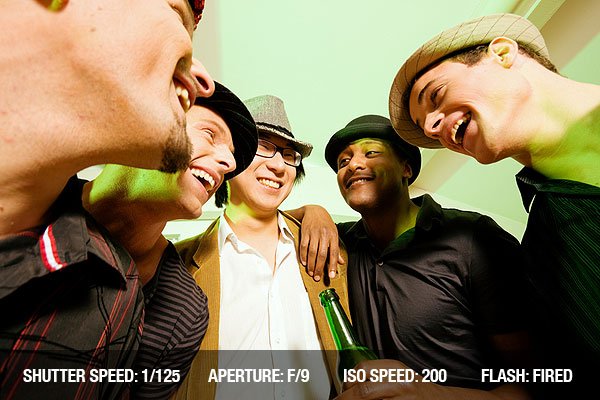 To elevate your compositions from run-of-the-mill party shots, radically experiment with angles.

As New Year’s is a no-holds-bar celebration (or at least most of the time it is), you can really push the limit with the compositions and angles (really high, extremely low, Dutch tilts, etc.); whatever you think will add that extra oomph to a shot. One beauty of digital photography is that you can always immediately review, tweak, or delete your photos as you take them.

Unorthodox camera angles and posing is part of embracing the spirit of the ringing in the New Year, so don’t hold back… everyone you’re partying with will want to be included once you show the first edgy, experimental image. At that point, all you have to do is keep the camera roving.

Use the Entire Frame 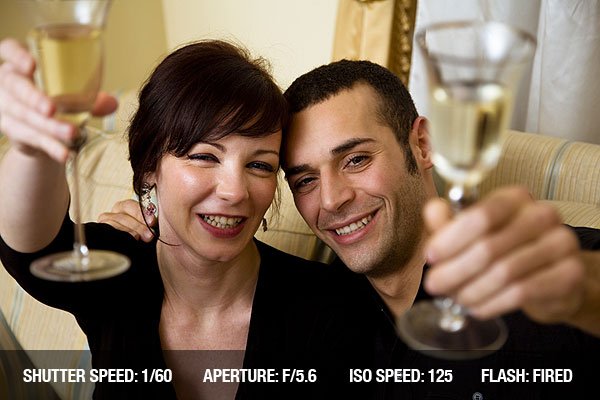 One of the signs of a more seasoned photographic eye is the composition, and utilizing the entire frame is part of that growth process (you can use negative space techniques, but that’s a little ineffective when you’re at a New Year’s Eve party).

When you fill the entire frame with your subject you increase the dynamism and potency of the subject and the spirit of the occasion.

In the photo to the right, notice how the raised glasses added a joyous feeling to the double portrait? It works because the glasses act as pillars at the edge of the frame to push your eye toward the two people. If there was more (empty) space on the edges, the photo would not be nearly as effective. As a simple “cheers” photo, you couldn’t ask for a better one. 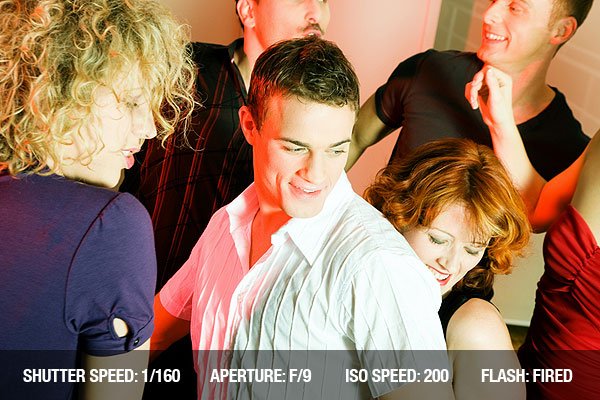 At most parties, people have come to let loose and burn off some steam, and that’s doubly true on New Year’s Eve.

The end of the year, end of the winter holidays, and the ritual of “making a New Year’s Resolution” gives people license to act a fool “one last time” before they get “serious.” To amplify the action, employ photographic techniques that aren’t typically used for indoor situations, like panning or zooming-in while you release the shutter (use a shutter speed of maybe 1/15) to get a blur effect as well as the interesting effect of zooming the lens during a shot. Dragging the shutter will give you a dynamic image too.

The trick is to use the mechanical aspects of the camera to give you a non-traditional shot while you’re photographing people having a great time. 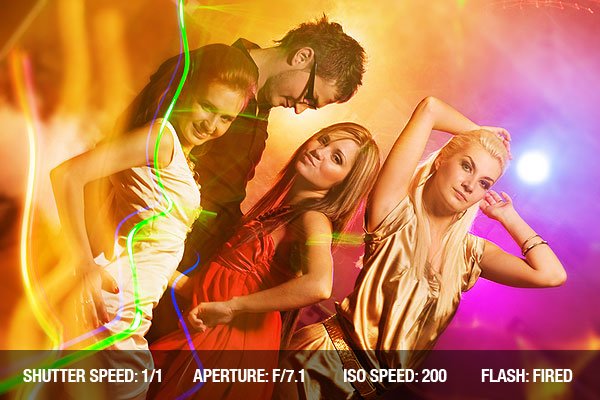 Using a High-speed sync flash (preferably a cabled one, but any Speedlite flash unit will do) at New Year’s Eve party with the vibrant lighting and colorful decorations, will create a psychedelic quality in your photographs.

One of the more interesting and creative uses of High Speed Sync, in a party situation, is to use the Rear Curtain Sync mode; which is very effective when capturing moving subjects and using longer shutter speeds. The result is a flash-frozen object, accompanied with light trails and motion blur ghosting. Flash-frozen moving objects (e.g. people dancing) will add to the image’s expressive quality and vibrancy. You’ll want to experiment with this technique BEFORE the party to get the knack of it. Then you can use it more creatively and deliberately. 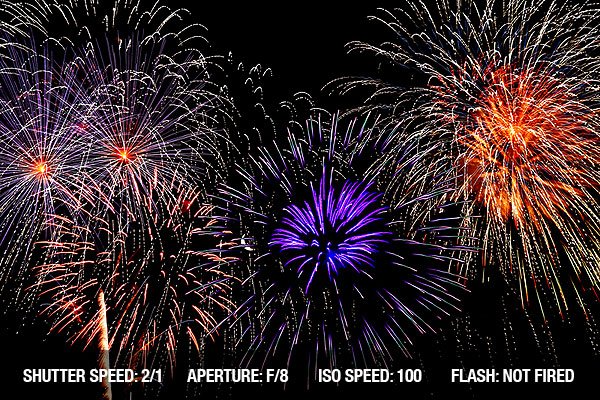 Fireworks bring a cascade of emotions to nearly every observer, so you’ll want to make these images count. Use a tripod and a remote release device (cable or RC unit) to ensure that your camera is rock-solid when releasing the shutter. Use “bulb” mode to hold the shutter open from the moment the firework takes off to the moment the last fire trail disappears (maybe 4 to 5 seconds).

Framing your photograph will be the hardest part because you have to guess ahead of time where the firework will explode. Use a zoom lens, like 80mm – 200mm to give you the best options, but bear in mind at 200mm you have to KNOW where the firework will go off to capture the shot. Since the shutter speed is going to be fairly long, you’ll want to set the aperture between f/8 and f/16.

For more, check out our Fireworks Photography tips.

As already mentioned, the exposure is going to be dictated by what images you’re trying to capture (e.g. a small aperture is best for fireworks, but a large aperture is good for the indoor photos with rear curtain sync).

Likewise with your shutter speed, use bulb when shooting the fireworks, but use shutter speeds of 1/60th or faster for capturing the party explosions (like when the clock strikes midnight) and for rear curtain sync flash photography.

You’ll want to keep the ISO at 100 for the least digital noise. However, depending on the ambient light level, you might have to increase the ISO to 400 when taking outdoor photos at night.

Outside of your camera, the equipment you should have to photographically capture New Year’s Eve with more creativity and flexibility is a Speedlite (for High Speed Flash Sync techniques), a medium range zoom (28mm – 80mm) lens, a tripod, and a remote shutter release (if you are photographing fireworks).

Extra memory cards are always good to have because you can load up the card fairly quickly based on the length of the party and what’s planned for the evening.

New Year’s Eve has many opportunities for you to try out photographic techniques that you don’t typically get to use – like Rear Curtain Sync.

The key to making this evening work photographically is to participate in the festivities WHILE you sneak candid photos. You don’t want to have too many formally posed images; the night is about breaking loose and shedding the old, so people want to be outrageous with their fun – that means being as unobtrusive as possible.

You have two jobs on New Year’s Eve – get the photos you want and have fun.